The series was called Risk.  Enticing.  So I took a risk and didn’t do my ‘homework’, I didn’t listen to anything by The Necks before their gig at Birmingham Town Hall.   The organisers had taken a risk and turned the almost overwhelmingly cavernous Town Hall into a cosy venue – we sat on all sides of the band, on the same level. No lofty stage. We sat so close I could almost gently nudge a sliding cymbal back into place.  They captivate by their stillness, slight figures in black, only the occasional gentle glance at the audience by the drummer indicated they knew we were there.  Everything about them is spare, taut and precise.  Painters with a blank canvas, surgeons ready for an operation but unsure what they might find after the first incision.  In profile the pianist Chris Abrahams reminded me of an intaglio, an engraved gem of precious stone, frozen in time.  Only his fingers moved, gently, so gently the keys seem to depress themselves by thought not action. Could a piano be played so quietly?

Did the drummer touch his drums at all?   Instead we heard tiny sounds and scrapes, a cymbal ticked and tapped delicately for what seemed like hours. The bass player toying with the idea of using his bow, putting it away thoughtfully and returning to his few insistent notes.  After just a few minutes I realised I was not hearing anything that reached back to the European tradition I was familiar with. This was Australian impressionism, its own tradition, unapologetic and unique.  In my mind’s eye I sensed huge empty spaces, felt scorched by heat, strained after trains clanging in the very far distance (leaving without me, oh, nightmare), was suffocated in a dust storm, dodged hissing rattle snakes, gasped for air as they built up the emotion so intensely I wanted to cover my ears, to block the waves that crowded my brain. How would they end, how could they end?    How did they take us from minimal notes to this vast canvas?

Then it slowed, some imperceptible sign, and just the drummer was left.  They became human, arms moved from instruments, they straightened up,  eyes refocused and the spell was broken. But we dared not applaud, not yet, not for a very long beat. It seemed almost wrong to break the silence.  And we went into the night bewitched, shaking our heads at the distance we had travelled.

There was an aphorism from the First World War, “Don’t judge a man by his umbrella, it may not be his”.   But I think you can judge the quality of a musician’s work by the company he keeps on an album.  The guitarist and composer Francesco Lo Castro has surrounded himself with some very fine musicians on Chasing Beauty.   This heartfelt album of self compositions contains some lovely Miles-ish cameos for Fulvio Sigurta on trumpet (or flugelhorn) in As it is and for Maurizio Minardi on accordion.  The title refers to the worthwhile activity of seeking beauty in the mundane as well as the perfect. There are affectionate, jaunty, pictures of places, people and times past. It is not introspective, it demonstrates an attractive openness.  It is a perfect album for relaxation, calming and gentle.  I can easily imagine it being played in cafes in Europe.  But listen a bit deeper and you will spot gems such as Joe Fowler’s haunting flute on Nino and Dunia which paints a serene portrait of two friends, and the very lovely accordion of Maurizio Minardi on the upbeat May 2011.   There is no doubting Francesco’s prowess on both acoustic and electric guitar, the subtle shades and tempos are memorable.  His tunes, such as Sahara with its rocking motion like a camel, and Dresden with its arresting opening,  have a habit of sticking in your mind very quickly, and that’s no bad thing.

I first heard the Roberto Olzer Trio play the Sting cover Every Little Thing She Does is Magic and bought the album on the whim that any trio containing bass player Yuri Goloubev was worth listening to. My hunch was justified. This is a lovely album of jewelled lyricism by Italian pianist Roberto Olzer. The jaunty Sting cover is not typical of the album, it is memorable but then so are the other nine tracks. Roberto studied the organ and I think this shows in the delicate layers of sound that hang around like the echo of an organ in the fan vaulting of a cathedral, you look up and feel wonder. The album is very visual, each track seems to tell a story, from the unsteady Madman of the opening, to FF (Fast Forward) which seems to want to trip up each musician. Especially beautiful is tragic Gloomy Sunday where the bass is intent on wallowing in misery. The sound swells and falls, like good ideas dismissed out of pessimism. You almost need to listen to each track on its own, they are exquisite short stories you want to savour.

It was recorded and mixed by Stefano Armerio in June 2012 (he also recorded Maciek Pysz’s Insight). Deserves a wider audience, especially in the UK. 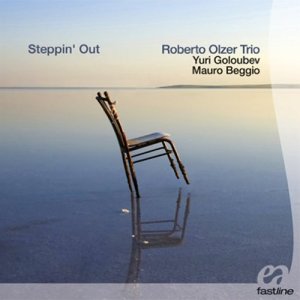