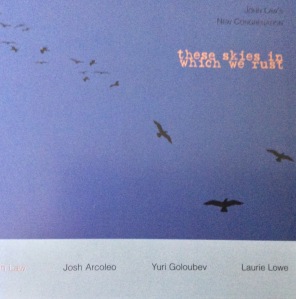 Ambitious in scope – 11 own compositions with inspiration from his daughter’s poetry, elements of Brahms’ Requiem, tricky time signatures and electromagnetic pulses from outer space – individually the pieces can make your blood run cold (just let your mind go back to how you felt on 9/11 when you listen to Incarnadine Day inspired by the poem of that name by John’s daughter Holly) or transport you to a magical place with just one note of the glockenspiel.  As always with John Law, there is breathtaking piano, he’s our 21st century Bach, cinematic tunes that grab you instantly, lyricism propelled by the lightning fast fingering and sublime sense of romance of Goloubev, the controlled seething, fizzing drums of Lowe.  A fresh sound in the New Congregation is Josh Arcoleo whose sax adds coolness and irony in Music of the Night.  The final track I Hold My Soul To The Wind features lovely wordless vocals from Holly Law (whose poem may have the voice of a teenager but has universal poignancy) and heartbreaking bass. The sound and mixing from Curtis Schwartz at Berry House Studios, Ardingly is perfect.

It was Valentine’s Day in London, the perfect evening for some romantic music and a glass or two of good wine, and what better than two guitars to relax you. But wait!  If the audience had been expecting gentle background music that they could chat over, they got something unexpectedly deep. From the very first chord of Manha de Carnaval (L. Bonfa) the audience were perfectly attentive, rapt by the magic that unfolded. The guitarists in question were Maciek Pysz and Gianluca Corona, two masters of classical and acoustic guitars, and quite obviously two old friends. Unlike other gigs I go to, the people around me listened harder because the music, and perhaps the experience of live music in an intimate venue, was new to them.

We concentrated hard and were rewarded with a wide repertoire from the catchy familiar Manha  which was given a glorious rolling gait, to compositions by Maciek from his album Insight and new work from an upcoming duo album. Jokes such as “Guess what this composition is called?  Lost in London!” had particular resonance for many in the room, foreigners in a big city. I was particularly moved by Amici,  their joint composition, it ranged over many emotions and was about their friendship which goes back many years.   And we had a taster of an upcoming album of the duo – Fresh Look – which they record this summer and will be released on 33Jazz later this year.

These two masters of the guitar completely trashed the idea that guitar music is something you have as background music.  You have to see it to marvel at the delicate intricate sounds, the dazzle of flashing fingers, the glorious melodies, the effortlessness of it all. Afterwards you just smile. What better way to spend Valentine’s Day?

You can catch up with the Maciek Pysz Trio on their tour March – May 2014 – for details see http://www.maciekpysz.com/

and if you have 21 minutes there is an interesting podcast with Maciek Pysz here  with London Jazz News. 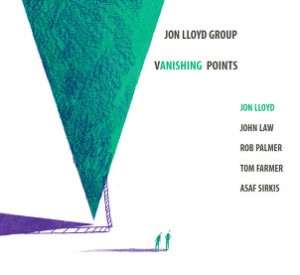 This is an extremely elegant album.  I don’t know why I am surprised at saying this. I suppose I thought that saxophonist Jon Lloyd, a musician who has spent his life exploring the boundaries of structure and freedom, would be challenging, in a negative sense. I was wrong.  At Sherborne Jazz Club on 7 December, tempted out by the name  ‘John Law’ I once more saw piano and fender rhodes in mutual support (the earlier occasion was Brad Mehldau at the Barbican).  If I had been distracted by the pianist, then it took only a few minutes to realise that this is a very special group led by a very expressive, communicative and generous leader.  The lineup on paper was breathtaking – Asaf Sirkis, Tom Farmer and Rob Palmer. Last minute changes of personnel saw Mark Whitlam and Joe Limburn replace the drummer and bass player respectively. They both had the gig of their lives, showing no signs of being replacements.  They were sensitively supported and encouraged by Jon and John, allowed solos and the freedom of their illustrious forebears on the album. It was a memorable evening, serving as a reminder, if one were needed, that excellent, accessible and enjoyable jazz can be heard outside London, you just have to make an effort to get there. The experience of the evening was an accurate flavour of the album.

All nine compositions are gems.  The exquisite X and Y  opens the album with buoyant bubbling soprano sax.  Even at its most penetrating, it has a warm, serene, caramel sound. The melody is pastoral, gentle, songlike. The lyricism of John Law is always heart stopping, such delicate shading, especially in Yaga where the piano could be a sitar. In 5678 I felt we were in square dance territory, where quick footwork was needed as the time signatures crossed, got jumbled and tripped each other up. It was fun!  I thought ‘This isn’t free jazz, I can hum this (phew!)’ and I relaxed, and so became more receptive to the delicacies on offer: the symphonic, almost-classical opening to V Points where the piano solo, with gentle snowflake motif (a signature John Law effect), creates a mood of uneasiness echoed by the slowly burning guitar, the wary walk of the sax towards a guitar that howls, a sense of chaos and pain which gently fades.  The thrum of fingers on piano wires.   There are many strands in this music, you uncover them with repeated listening. It is harmonious and democratic, there is no need for extended solos, yet take any instrument away and you would miss it.

The video below, from June 2010 (and not on the album), is a wonderful taster of this very classy quintet, with slight changes of personnel.   They deserve greater recognition for the beauty of the harmonies and melodies, the purity and serenity of the saxophone, the electronic subtleties, its modesty despite a starry lineup.  The group tours in 2014, please go and see them! This group must not vanish.

All compositions by Jon Lloyd except Improv (Lloyd/Farmer/Sirkis)

Maciek Pysz is a Polish guitarist and composer joined on Insight by longstanding partners Asaf Sirkis on percussion and Yuri Goloubev on double bass. The album comprises eight compositions and arrangements by Maciek and one with Gianluca Corona. The sleeve notes make clear that many of the intricate compositions were born out of imagining (or experiencing) loneliness or loss, but also wonder at the world and its beauty. They are very personal, we get an insight into Maciek’s life and thoughts. And the output we hear is the result of five years playing together and it is world class.

On the sleeve of Insight, insight is defined as “the act… of understanding the inner nature of things or of seeing intuitively”. So at the launch of the album last night (22 May 2013) at The Forge in London, I was interested in seeing how this idea would be conveyed. The cover shows Maciek with eyes closed, in contemplation or meditation. Yet it would be impossible to perform in a trio if you were wrapt in yourself. So in performance, Maciek’s eyes smile with pleasure, Yuri’s are focussed on his music stand with the occasional flick of eyelids to communicate approval or wry amusement, and Asaf keeps his eyes closed most of the time (like many drummers) except when waving an arm at Yuri or Maciek as if to say “Wow!”

It was an evening to gasp, not just at Maciek’s breathtaking skills, conjuring the most delicate sounds out of steel and nylon wire, nor at Yuri’s serene arco playing on his double bass with antique patina, or Asaf’s magical patter on the udu drum or beats so fast and hard they sounded like firecrackers. You gasped because it sounded fluent and effortless, and because it made you feel so happy. An album launch should always be a joyful occasion but this one felt particularly so, there were many Polish people there, at least half of whom were women (yes, rare at jazz) and Maciek’s father present to crown it all. At one stage a small group near the stage moved as if to dance, and really that would have been most appropriate, it was hard to keep in your seat.

We had a few minutes of unaccompanied guitar in Recuerdos de la Alhambra (the classical piece by Francisco Tárrega). And a new composition called Tangella ( to the tango) which is not on the album. I think we heard all the album tracks with a bonus of hearing the eponymous title as an encore (at a slower tempo) as well as earlier in the set list. The sound was beautifully balanced, you could hear fingers on strings, delicate jingles of bells around Asaf’s ankles. The album has a similarly gorgeous sound being recorded, mixed and mastered by Stephano Amerio. Highly recommended.

Maciek is performing with this trio at Kings Place on Saturday 14 September 2013.

Insight is available from http://www.maciekpysz.com/