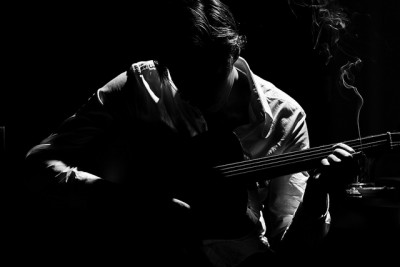 It wasn’t meant to be a feast of guitarists but that’s how the Saturday at the Kings Place festival turned out for me. I had intended to see only one – Maciek Pysz – but one turned into many, bringing a kaleidoscope of images, colours, shapes and sounds, and most joyous of all was the remembrance of musicians enjoying playing together, and showing it. Most vivid was the bougainvillea-coloured dress worn by Helen Sanderson of Vida Guitar Quartet, its colour and elegant drape giving a sense of occasion sometimes missing in jazz gigs! And what a treat – four classical acoustic guitarists performing recognisable orchestral works but arranged for guitars, with all the notes and sounds you’d expect from an orchestra. Thus we could hear the drums and pipes of Malcolm Arnold’s the second set of English Dances tapped out by fingernails. Rhapsody in Blue will never sound quite the same again, the wail of sirens created on strings. Two modern dancers joined the guitarists for Speed Bonnie Boat, the tumble and intertwining of the dancers’ flexing bodies making waves on the stage, always landing soundlessly, sometimes hanging in the air. A treat for all the senses.

Earlier guitarist Maciek Pysz and his Trio gathered a huge crowd near the box office. A friend was converted to jazz in just 30 minutes, so powerful and intoxicating was the short set, what captured him was the sense of pleasure communicated to us. He wanted to take it home! I looked round and people were smiling at the music. The music sounded darker than the album, the grey skies and need to fill the echoing space allowed Asaf Sirkis to pump up the volume. The sound was great, no loss of bass for Yuri Goloubev this time.

It was lovely to hear a different style of guitar just an hour later with Nicolas Meier. We headed a bit further east to the complex rhythms of Turkey. I couldn’t see how many strings Nicolas’s guitar had but it may have been a glissentar, the extra strings adding that distinctive twangy resonance and suddenly Kings Cross became Ankara. A small girl danced and whirled, unaware she reminded us of a dervish, adding to the performance.

No time for food, straight into Martin Speake’s Trio and another guitarist – Mike Outram whose quiet presence and delicate introduction to Folk song for Paul (about Paul Motian) moved me greatly, you can hear it below and enjoy this beautifully unhurried modest trio.

And finally a set I admit to being wary of but which left me reeling. No guitars this time. It was Food – Iain Ballamy on sax and Thomas Strønen on drums, Food lite, just these two artists and some electronics. Deep, deep innards-vibrating sounds which mesmerised, pinned me to my seat. Which night club had I wandered into? You didn’t experience this through your ears but your vital organs. This was a very different, daring performance, nothing sparce, just sheer enjoyment again, an experiment that worked. A whole day that worked.

An excited full house at Hall One, Kings Place on 25 May 2013.  We were there for the launch of Kenny Wheeler’s Mirrors,  his settings of poems by Stevie Smith, Lewis Carroll and WB Yeates, with vocals by Norma Winstone and the London Vocal Project.   My anticipation was sharpened by a  pre-concert talk by Pete Churchill.  In a short, perceptive and enjoyable talk we learned that Kenny writes deceptively easy music within complex chords, that he allows his musicians freedom to destroy his work, that he creates order out of chaos and madness.   Like a swan serenely gliding by, we are unaware of the energy and strength beneath that swan.  We learned that sad songs make him happy.  And indeed you are constantly teased in this work by the airy voices of the choir, sounding so Sixties and optimistic, contrasting with lyrics rife with loss, death and mourning.   How masterly.

So, briefed with his insight, we listened and were rewarded with a glorious performance of Mirrors in its entirety,  played without interval.   The vast London Vocal Project, led very subtly by Pete Churchill from the far side of the stage, sounded dazzling, the result of five years singing together.   Their light and young voices, and obvious love of the music, perfectly enunciated the profound, and at times, quite mad, lyrics.  Everyone from the album was there, except James Maddren, replaced by the always reliable Martin France on drums.   The sound was perfect, so flawless you didn’t have to think about it.

At centre stage, the slight modest figure of Kenny, flanked by Mark Lockheart on saxophones, Nikki Iles on piano and Norma Winstone.  All put in bravura, moving performances, Kenny especially so, rising from his chair on at least two occasions to acknowledge our applause, his fragile notes floating in the air.  It was a very special, poignant, evening that matched the promise and rewards of the album.  There was a real buzz at Kings Place afterwards, as if people did not want the evening to end.